I've been neglecting this blog for awhile, due to real life obligations. I hope to get back to it soon. In the meantime, I'll be going through the older entries and replacing some of the videos that were yanked by Youtube.
Posted by Emily at 5:44 PM 68 comments:

Sesame Street: People in Your Neighborhood

Anybody who watched Sesame Street before it turned into The Elmo Show is familiar with these sketches. You know, Bob sings about random people that one might encounter in the neighborhood. Well, this 1988 version featured several... intersting celebrity cameos: Barbara Walters, Martina Navratilova, and Ralph Nader.

I guess I'll file this as a bumper...

Back before Disney became the evil conglomerate that it is today, they provided kids with quality shows that didn't involve the caterwauling of nasal-voiced teenagers. The Disney Afternoon was a staple in the TV viewing habits of kids born in the 80s.

My Disney Afternoon programs of choice included The Gummi Bears, Duck Tales, Chip 'n Dale's Rescue Rangers, Tale Spin, Goof Troop, and once in awhile, Darkwing Duck. I tried to give Bonkers a chance, but that show was absolutely abysmal. The made more than one dig at it on Animaniacs for a good reason. Plus, unlike its predecessors, it didn't have an awesome theme song. Soon after, I abandoned The Disney Afternoon, due to the line-up changes and my impending puberty.

Here's the first intro, featuring characters from the original four (The Gummi Bears, Duck Tales, Chip 'n Dale's Rescue Rangers and Tale Spin), plus Darkwing Duck, whose show was in the works at the time:

Here's another version, with the addition of characters from Darkwing Duck, Goofy, Max, and (ugh) Bonkers:

There was apparently a soundtrack that was sold in stores (I'm going to have to scavenge the local used record stores now). Here's the full version of the Disney Afternoon theme. You gotta love the jazzy flute solo:

When I was a kid, I absolutely hated baby dolls for some reason. I used to wonder if this had anything to do with the jealousy I experienced upon the arrival of my little brother when I was three and a half, but there's a picture of me on Christmas morning opening a baby doll with a horrified expression on my face, and I was still an only child at that point (my mom was actually about three months pregnant when that picture was taken, but my jealousy didn't surface until my brother arrived home from the hospital). I like real babies, so I guess my aversion to baby dolls will remain an enigma.

Needless to say, I absolutely despised the Baby Shivers commercial. Even at eight years old, the jingle made me want to puke. The doll also creeped me out, and it wasn't only because it looked like this: 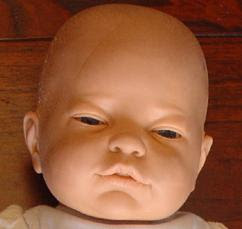 The idea of a shivering doll was just unsettling to me back then. It actually still is, when I think about babies that shiver uncontrollably in real life. Baby Shivers? More like Baby Crack Withdrawal.

As if this doll wasn't creepy enough, you apparently had to remove its head in order to replace the batteries.

Here's the only Baby Shivers commercial I was able to find. It's part of a compilation of commercials the uploader posted, so to get straight to Baby Shivers, click here.
Posted by Emily at 11:09 AM 41 comments:

Saved by the Bell: Jessie's So Excited

Everybody who watched Saved by the Bell lists this among their highlight reel:

If Jessie gets like this after a few over-the-counter caffeine pills, I'd hate to see what cocaine or meth would do to her.

Jessie's freak out is just as hilarious now as it was circa 1991. Somebody else obviously thought so too, hence this awesome video: